This morning we woke up to gorgeous sunshine for our full day exploring Rome. We met up with Ellie and caught the metro to the Colosseum. We met up with our tour guide for the Colosseum and Roman Forum tour and were given our little headpieces so that we could hear her.

The tour of the Colosseum we did was a special one that apparently isn’t usually offered on Contiki – we got to walk through the gladiator gate and on to the arena floor.

The view from the arena floor was spectacular! Photos of the Colosseum just don’t compare to actually seeing it in person, it was pretty awe-inspiring. Especially when you think about how it was built 2000 years ago. The Colosseum was quite busy but we were one of the first tour groups into the Colosseum on the arena floor so we had uninterrupted views. 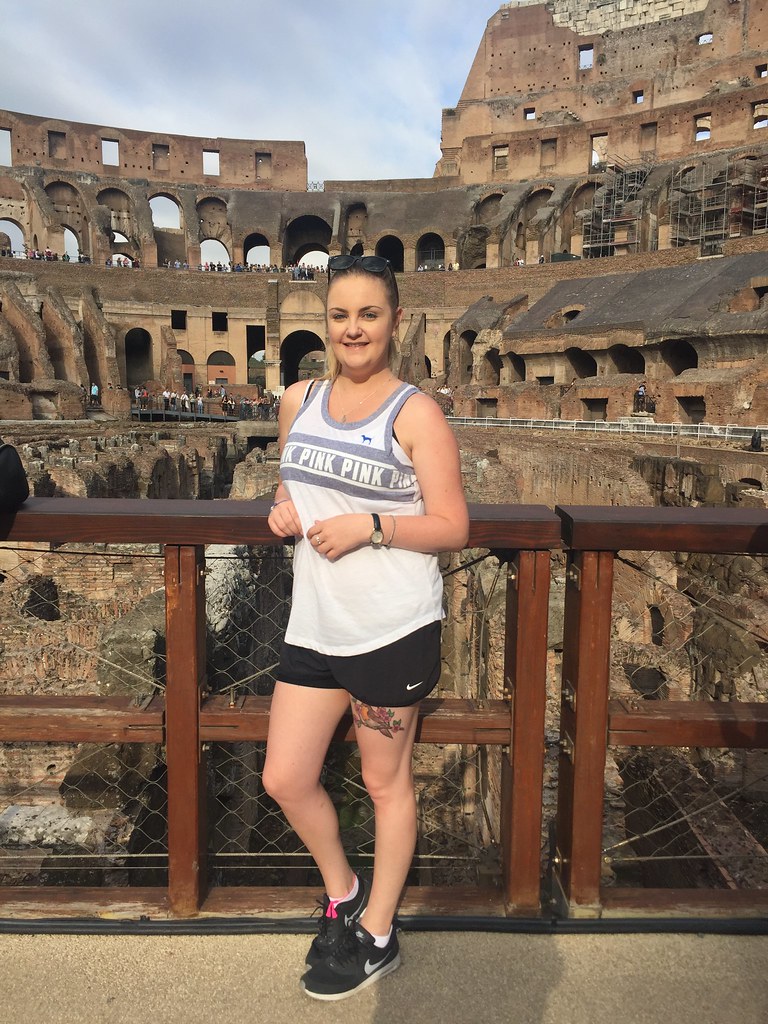 After spending some time inside the Colosseum, we headed across to the Roman Forum. On the way, we got some nice views of the Colosseum from the outside. 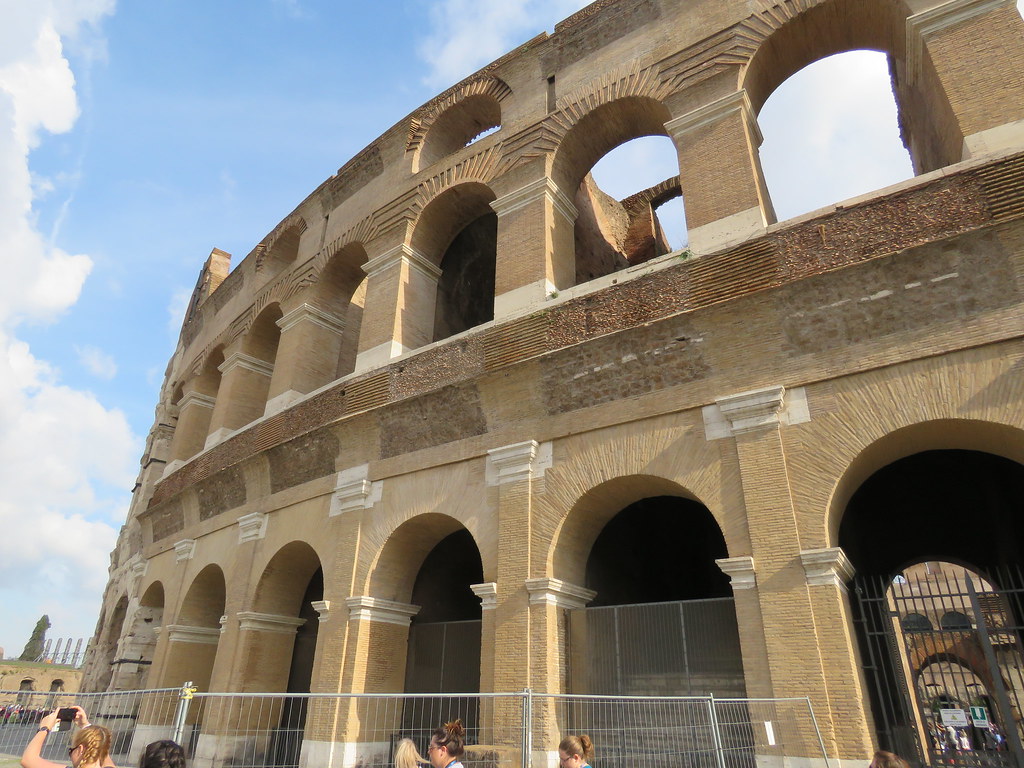 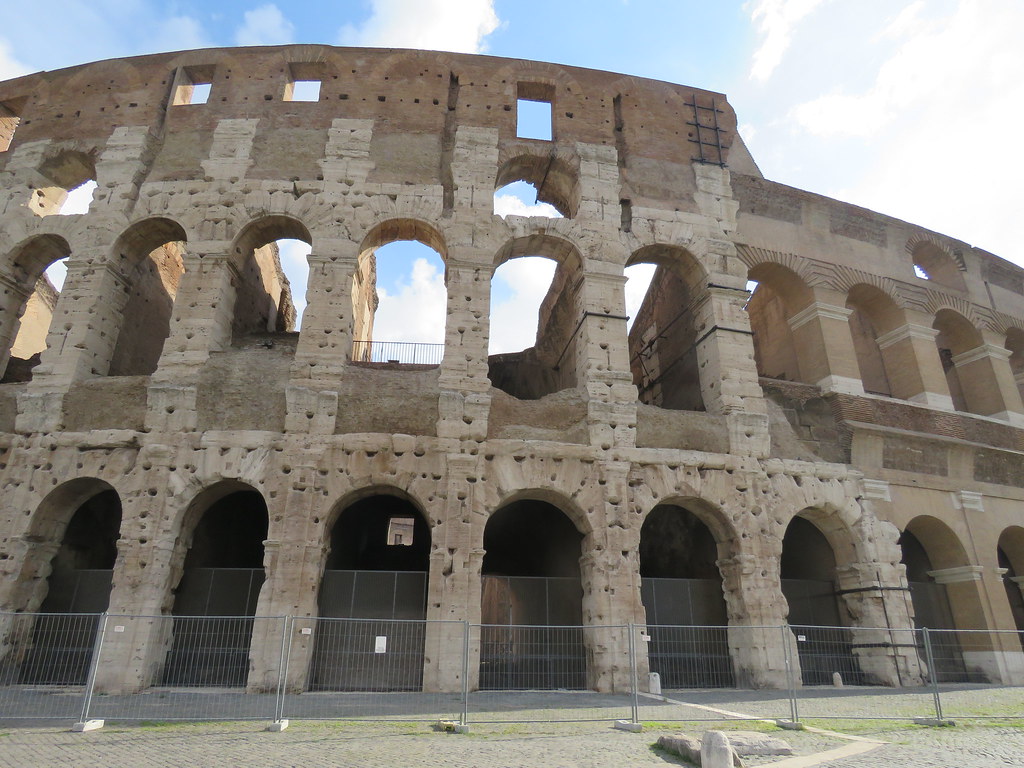 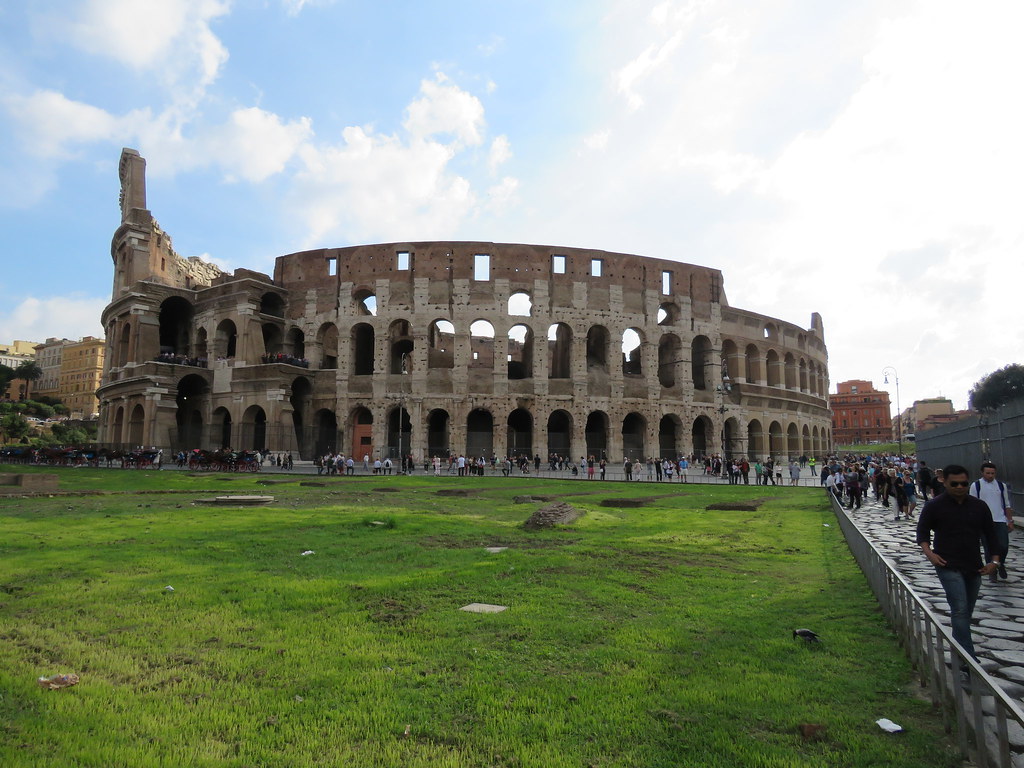 The sun was shining bright and it was so hot – I definitely couldn’t visit Rome in summer and try and sight-see. I mentioned this to the tour guide, and even she said it’s almost unbearable in summer – much more crowded and hot and sticky. It made me very glad I decided to visit in September!

The Forum was really interesting – lots of ruins of ancient government buildings and temples. Some of the arches and buildings I had studied in Classics at school, so it was pretty awesome to see them in person. 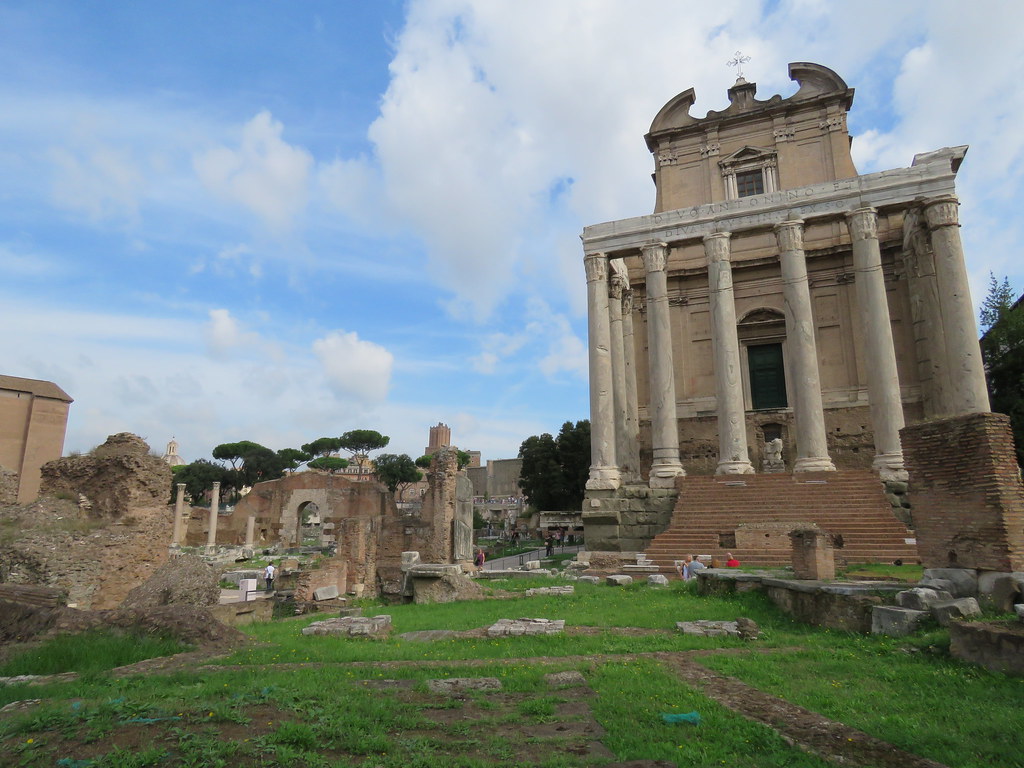 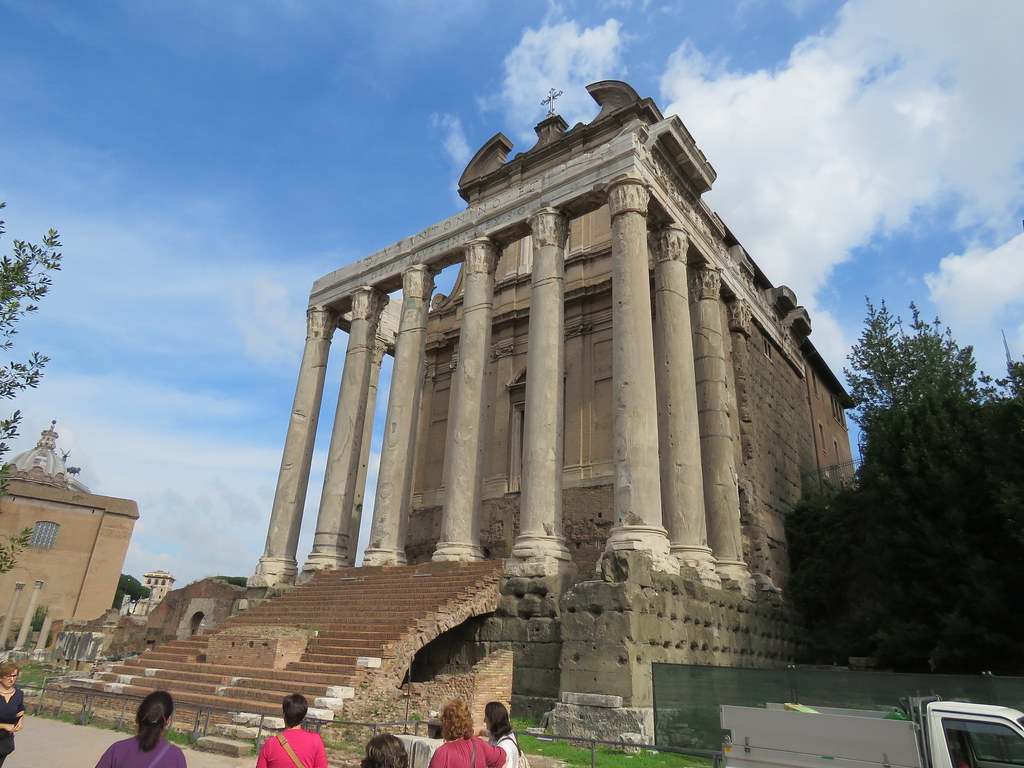 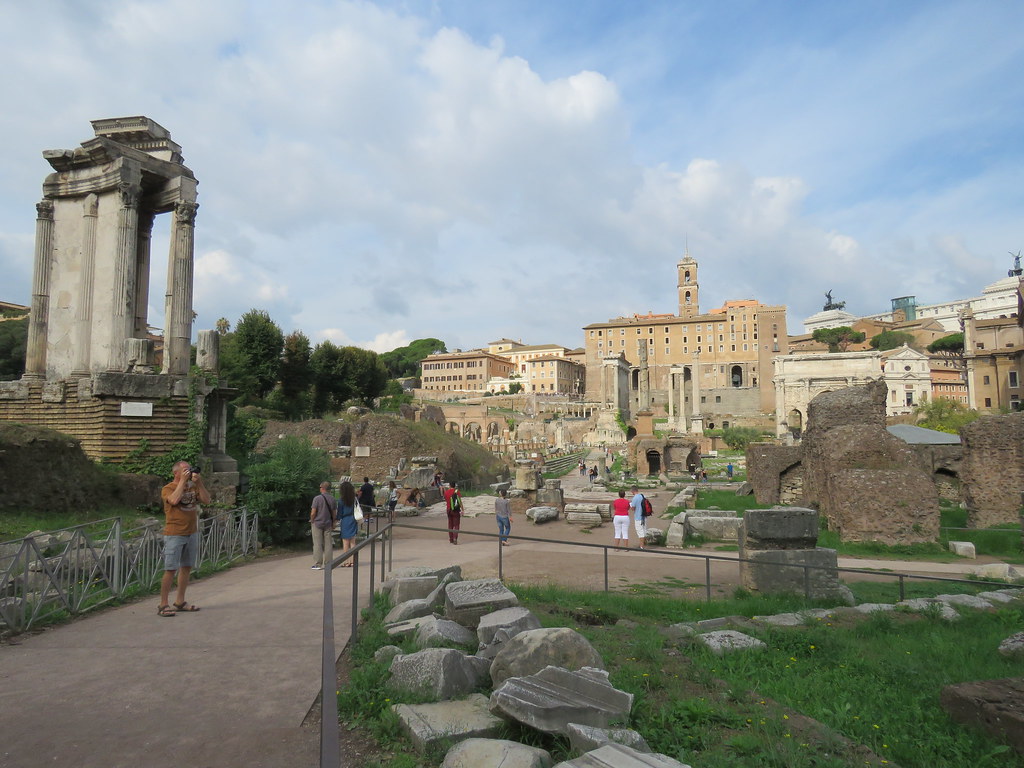 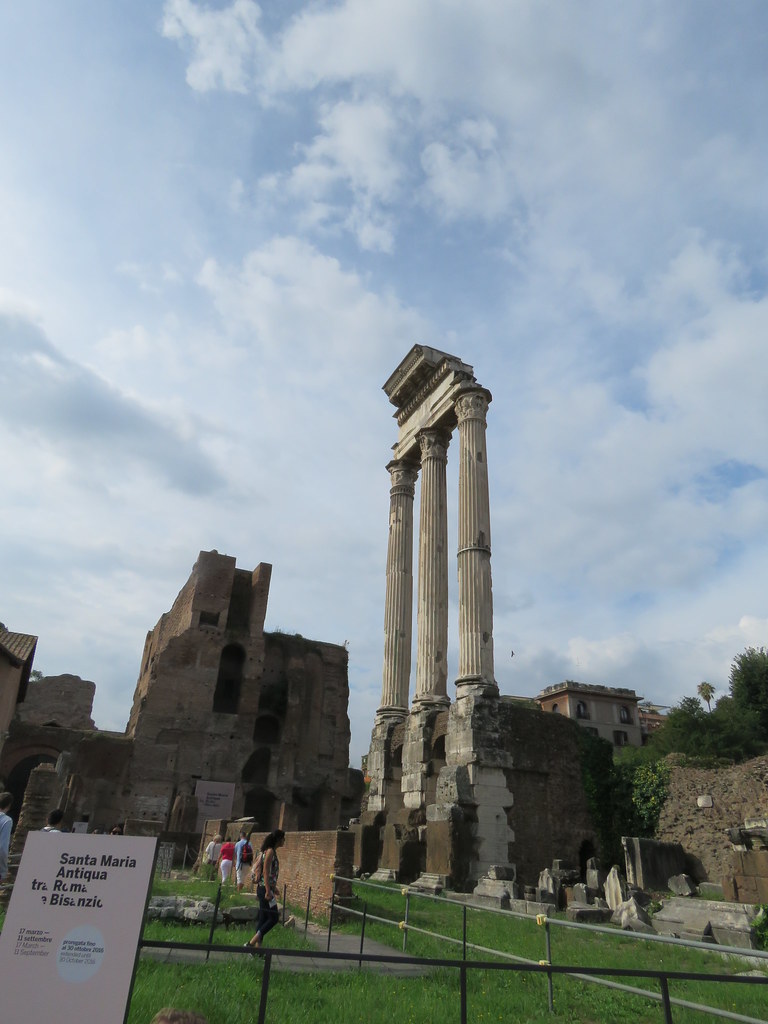 I kind of zoned out during the tour and didn’t really listen to the tour guide – she had a thick Italian accent so was hard to understand sometimes! But I still recommend the tour to anyone on this trip. As you can see in the photo below, none of us was really listening to the guide! We were all hot and getting tired! 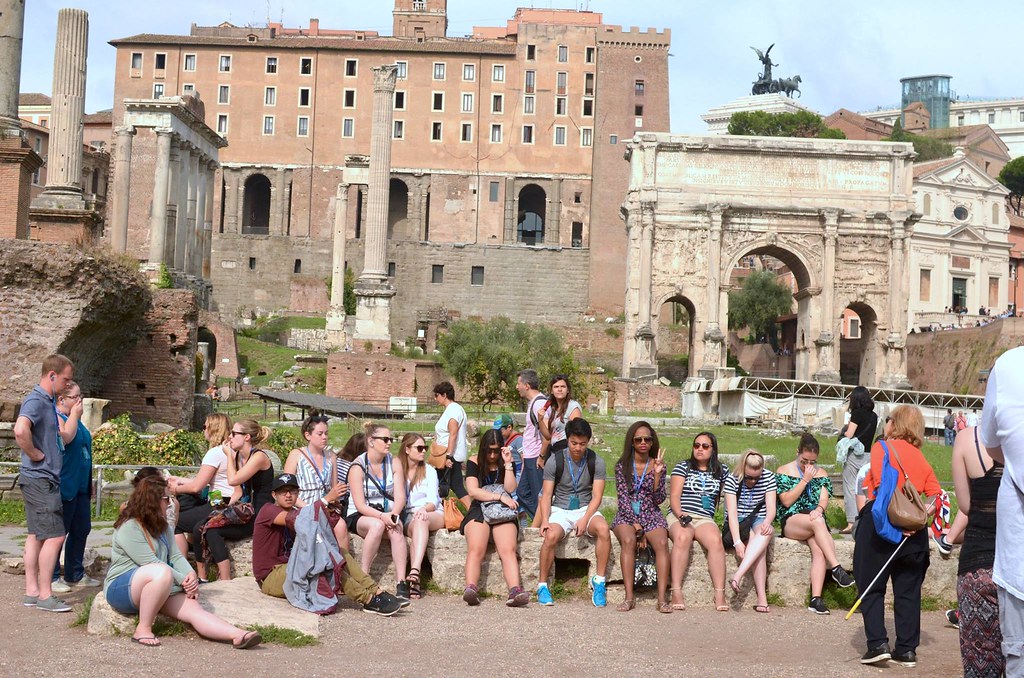 After we finished in the Forum, we met up with Ellie and she took us on a walking tour of Rome. We saw the ‘Wedding Cake’ building (actually called Altare della Patria) then we headed to the Trevi Fountain. Of course, the fountain was ridiculously crowded – people everywhere! 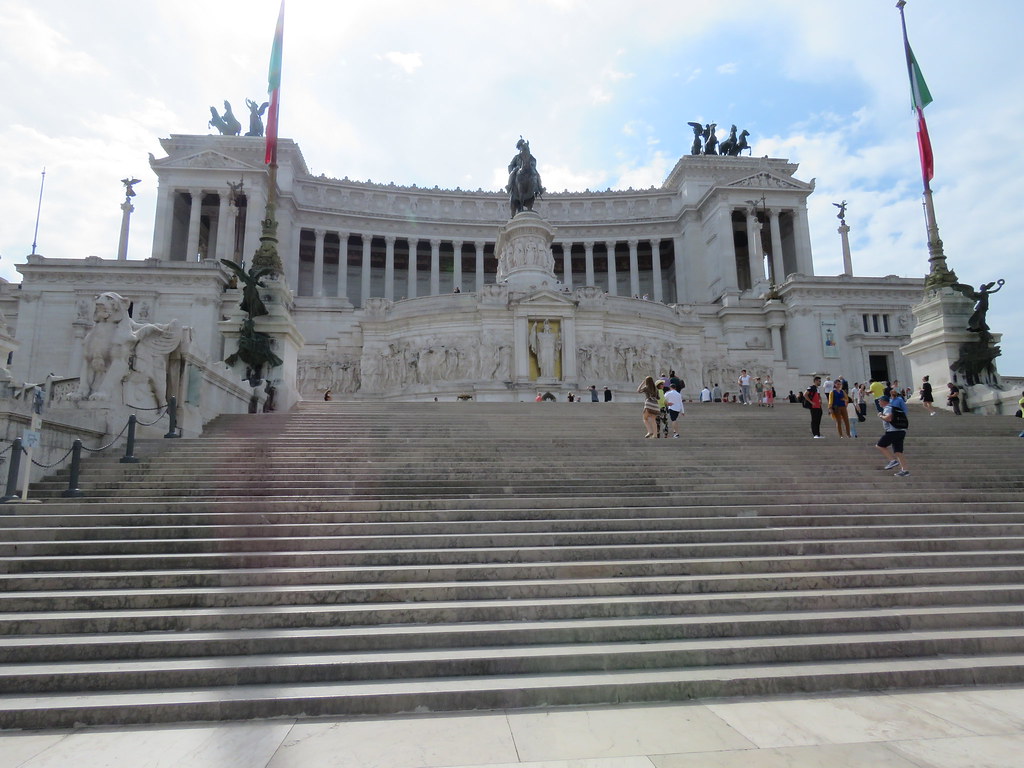 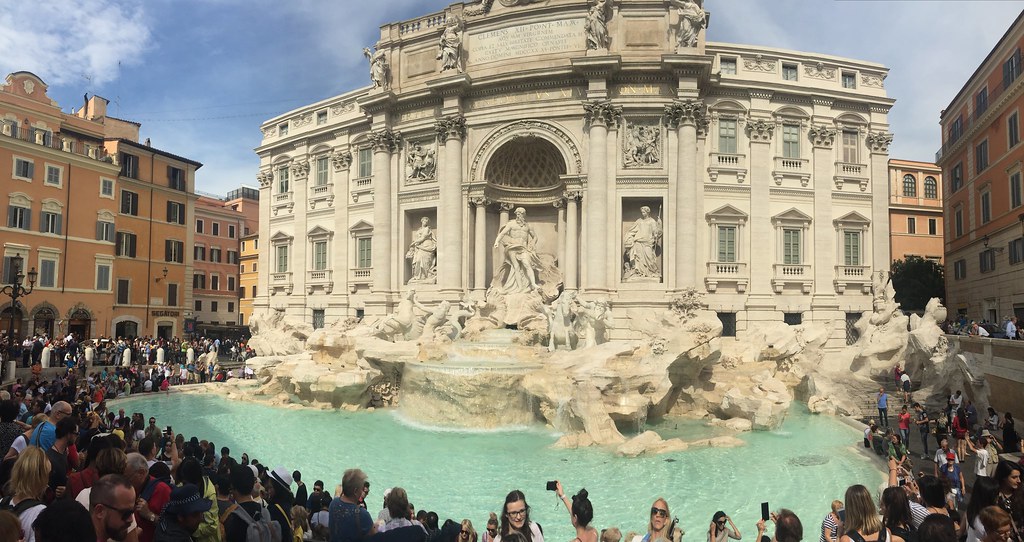 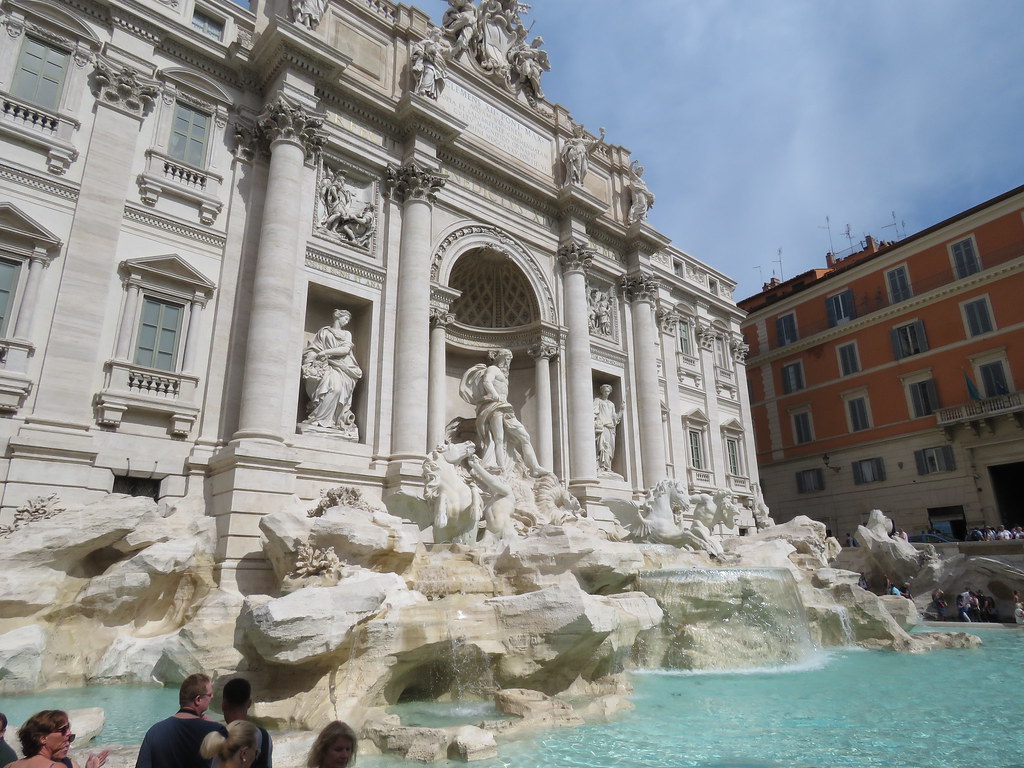 I got split up from the rest of the group, so was by myself when I threw my three coins into the fountain – one for love, one for luck and one for a safe return to Rome. It was fun but I wish someone was there to capture a photo of it! I had to settle for selfies in front of the fountain instead. 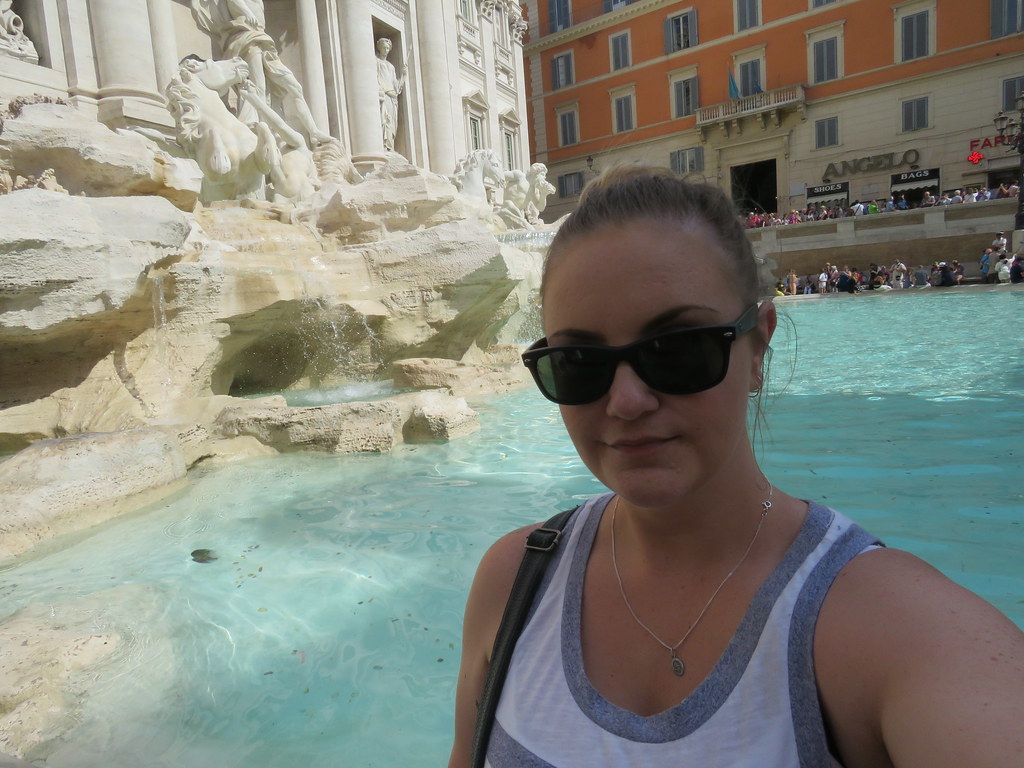 After taking some photos, I got gelato from a store nearby that Ellie had recommended – it was so crowded in the store but the gelato was worth it! I met up with the rest of the group and we headed to our last stop on the walking tour – the Pantheon. The Pantheon is amazing – another building that’s 2000 years old and still standing. 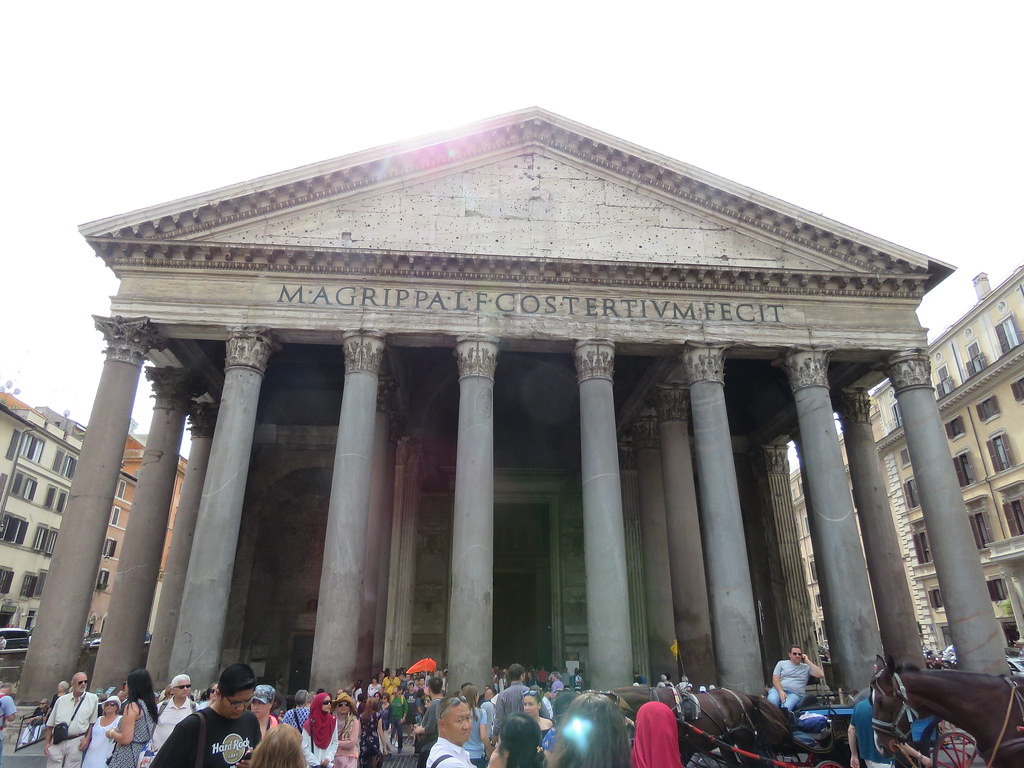 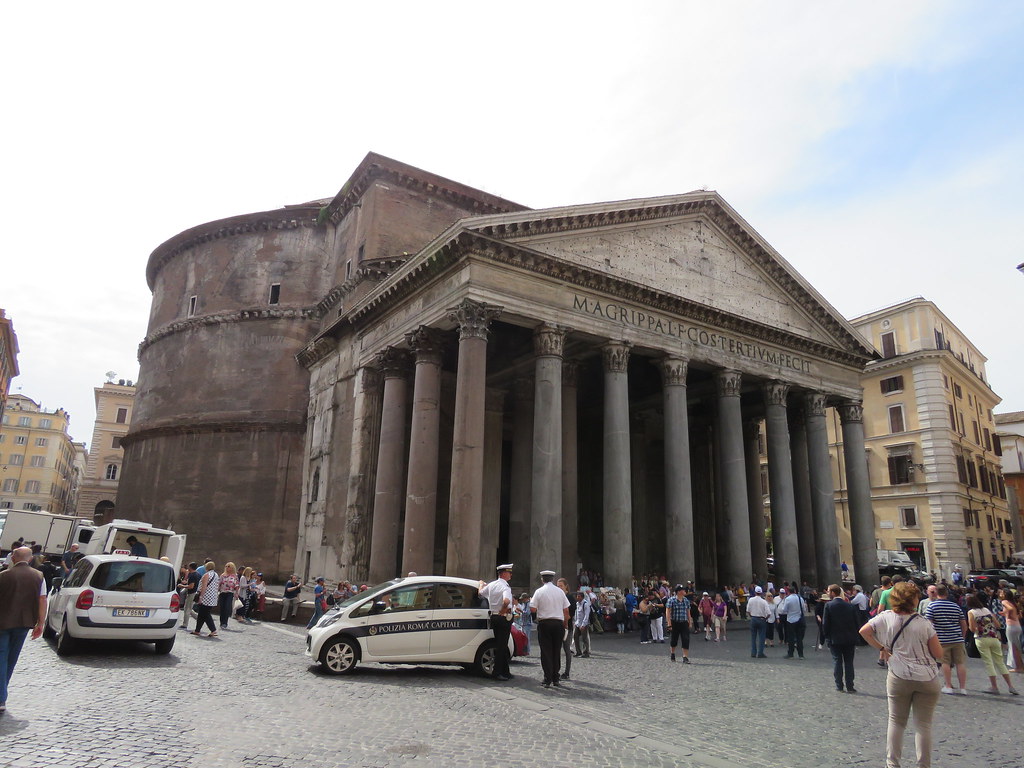 We went inside to look at the huge dome – it was really impressive! Another building that you have to see in real life because the photos just don’t do it justice! 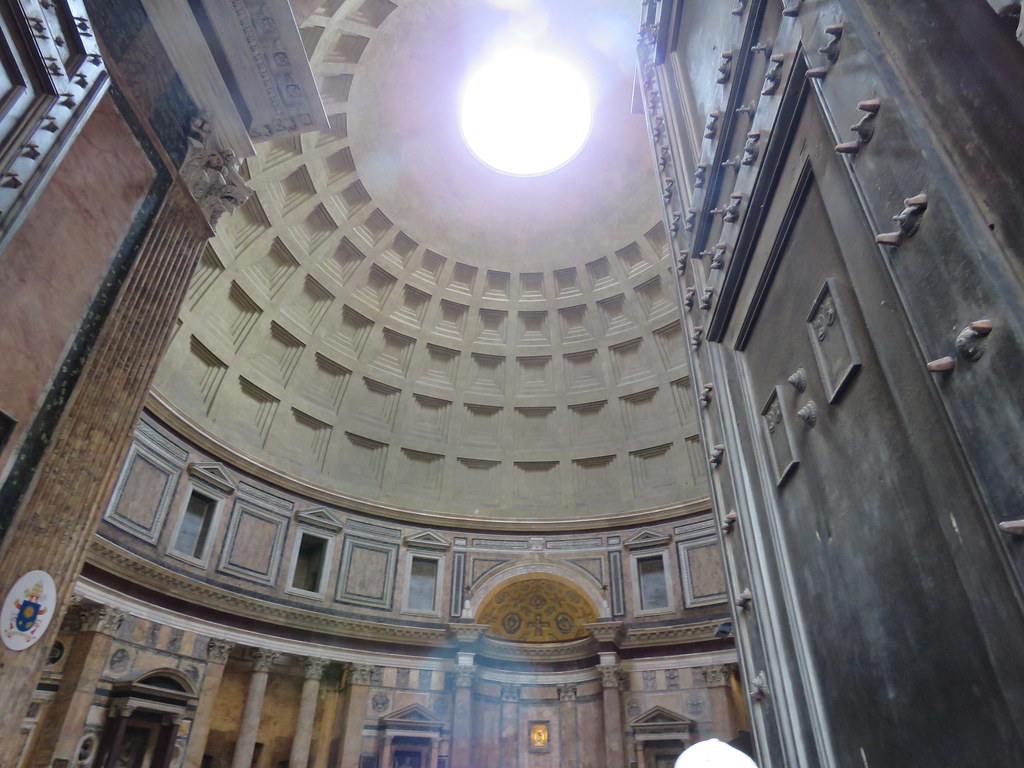 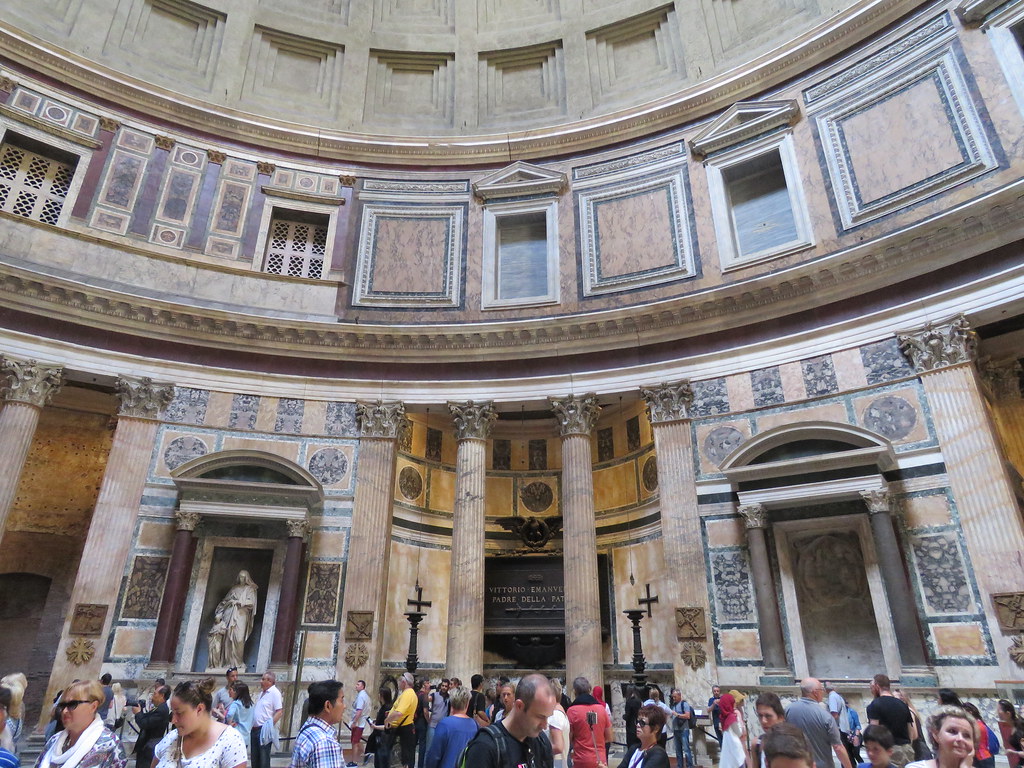 We were pretty hungry by now, so we found a little restaurant to have lunch it – I had carbonara – it was yuck! So disappointing to have bad pasta in Rome! After lunch, we walked around for a bit – I bought some nice paintings and a necklace with my name on it from a man that made it in front of me! Then we headed back to the hostel – we got a bit lost and ended up walking all the way back to the Colosseum and catching the metro from there. I got back to my room and was so exhausted, but there wasn’t much time to chill! I had to shower and get ready to go back out for the night’s optional that I had signed up for – pasta making lesson & dinner.

A lot of people didn’t sign up to this, but I actually loved it, and think it’s well worth the price. We had to catch the metro again then walk for about half an hour (no one was happy with this!) but it was all forgotten once we reached the pasta making class. It was so much fun – we made three kinds of pasta from scratch – fettuccine, ravioli and cavatelli. Making fettuccine was the most fun- we had the pasta stretched around the whole room with all of us holding it! 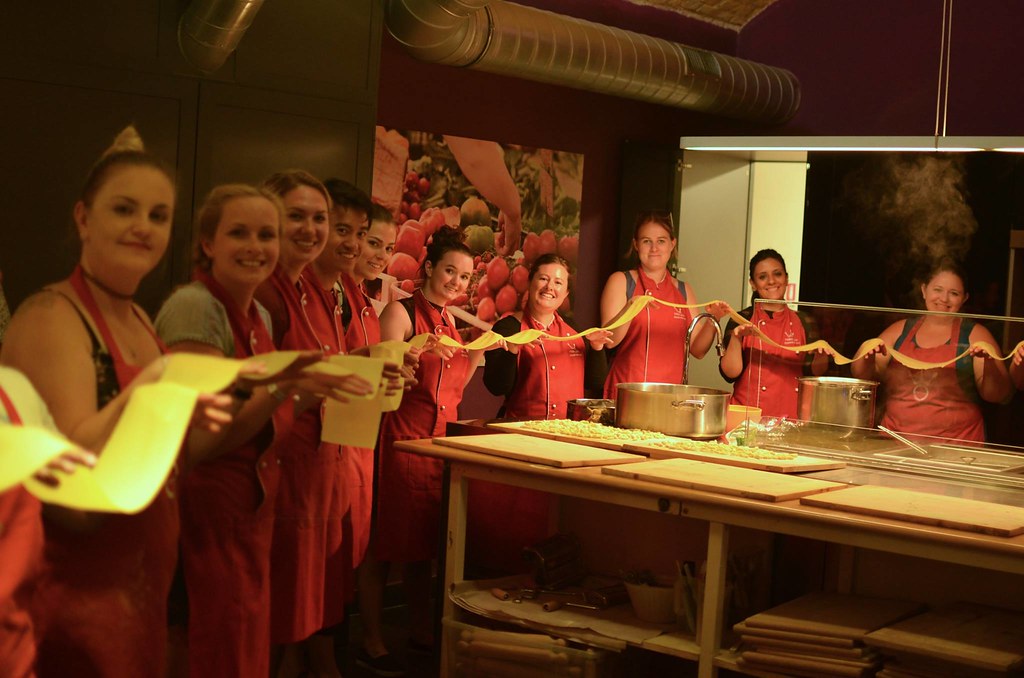 After making the pasta, we sat down with some wine while a chef cooked the pasta we had made- we had a three course meal and it was the best Italian food I’d eaten so far and the dishes they made with our pasta were delicious. This optional was well worth the price and I highly recommend it!

After dinner, we had to walk all the way back to the metro, which wasn’t fun! Then back at the hostel, there was a farewell party going on with those that were leaving the tour in Rome. I was absolutely exhausted, so I went down to say goodbye (which was surprisingly sad!) and then I went back up to the room to go to bed.