We woke up on our first full day in Hawaii… and it was pouring down with rain. We couldn’t even see the beach from our room! It was a bit disappointing because today we had pre-booked a tour of Oahu with Oahu Nature Tours.

Because the tour was pre-booked, we couldn’t change it so we decided to suck it up and try and enjoy the day. We had booked the half-day North Shore Adventure which is a hour tour covering 120 miles around the island.

Our tour guide picked us up at 12.30 and then we headed out. Our first stop was at the Valley of Temples where they Byodo-In Temple is located. The buddhist temple is a replica of one in Japan and was built in 1968 to commemorate the 100-year anniversary of the first Japanese immigrants to Hawaii. The grounds at the temple are just beautiful, with swans and koi fish swimming in the ponds.

By this time, it was raining so we had to race to the gift shop to buy umbrellas! We got back on the bus and headed out towards our next stop, which was La’ie Point. The rain stayed away while we were here but we could see it coming in the distance.

We only spent a short time here to have a look at the unique rock formation of Kukuihoolua islet before we were back on the tour bus. 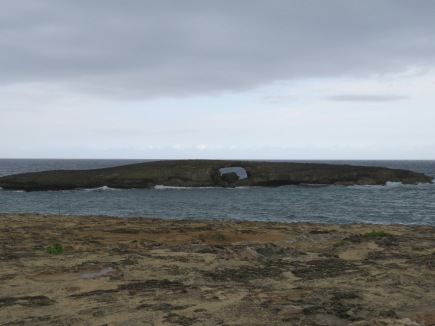 We were now on the North Shore of the island and our next stop was Sunset Beach, which in the winter months, is a popular surfing spot – however, there were no waves at this time of year. The beach is stunning when it’s sunny (I’ve seen pictures on Google!) but we were still just ahead of the rain, meaning my photos were less impressive.

After a quick stop here, we headed to another beach that was a well-known for Sea Turtles. There were none on the beach (probably due to the weather) but we spotted a few in the water a few metres from the beach, and they would quickly pop their head out of the water every now and then. They were so quick so it was hard to get a photo but I managed to snap one!

We headed away from the beaches and towards the Dole Pineapple plantation. On the way, we drove past the shrimp farms and lots of shrimp trucks, but we unfortunately didn’t get to stop. We had a short stop at the Dole Plantation – not enough time to see everything, but enough time to pick up some souvenirs and a delicious Dole Whip to end the day.

Our tour ended after the stop at the Dole Plantation and we headed back into Waikiki, arriving back at about 7pm. For dinner, we went to Chuck’s and had delicious fried shrimp and baked potato (it was so good!). 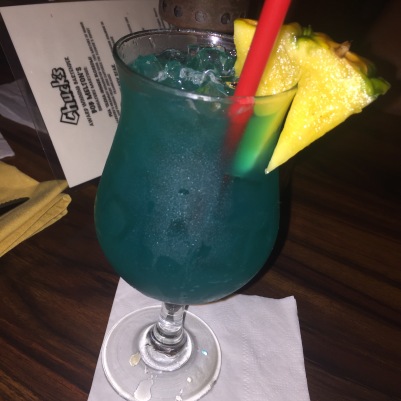 Overall, the tour with Oahu Nature Tours was a great way to see the island and I would recommend them. It was very disappointing that it was raining and horrible weather on the day of our tour (not that this is anyone’s fault!) and I do think the tour would have been much better (in terms of photos at least) if the weather was sunny!